Stitching along (and selling some too!)

It’s been a while since I posted.  Lots going on around here! 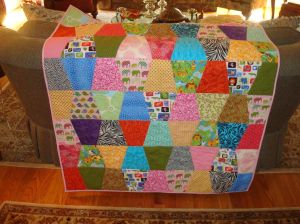 This quilt was made using the 6-1/2″ tumbler die from my Accuquilt GO.  This is a great way to use up larger scrap pieces from your stash.  I also have the3-1/2″ tumbler die that I can’t wait to try out.

I finished quilting the king size memory quilt my sister-in-law and I made for my in-law’s 50th wedding anniversary.  I think it’s safe to say that marked the first and last king size quilt I will do on my home machine.  It was a bear of a project.

Progress on the new house has been slow due to all the rain.  Rough plumbing went in today, so hopefully the weather will hold so they can pour the slab later in the week.  Then it’s on to framing.  Once the house has walls and a roof, things should go much quicker.  Or they’d better be.  I’ve had to make lots of decorating decisions in a short amount of time.  It’s enough to make your head spin.

Etsy store is doing much better the second time around.  I’ve almost made enough to cover the fees for a single reading team.  That’s pretty cool.  Thanks to everyone how has purchased something from my store.  I will be listing some table runners and t-shirt pillow covers later this week as I get to that part of my sewing room.