Well not really, but it sure looks that way doesn’t it?!  Anyway, a warmer than usual spring has resulted in major growth spurts on a number of my shrubs.  I hadn’t realized how jungle-like the nandinas had become until my HVAC technician pointed out that the one unit needed at least 12″ of space all the way around.  Think it’s time I invested in some electric hedge trimmers don’t you?  We’ll see what the lawn service does on their next visit as I notified the crew lead of the need to prune the bushes. 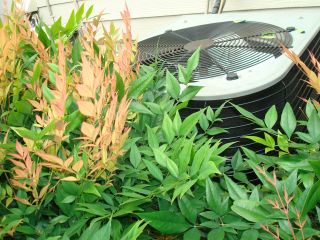