Come Stitch With Me, LLC

Several posts ago, I mentioned that I had been asked to make the school spirit banner that our reading bowl team members would carry at the reading bowl competition.  Here are three of the team members onstage during the parade of schools: 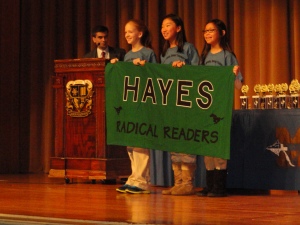 The finished banner size is 30″ x 60″.  The front and back are simply the quilting cotton from Joann’s that happened to be the correct shade of green to match our school colors.  A piece of very low loft lightweight batting is sandwiched between the two pieces to give it some body. This banner was simply stitched together along the edges and turned right side out with topstitching 1/4″ from the finished edge.  In hindsight, I think a traditional bound finish would have been easier as would using flannel instead of quilt batting.

The letters were made using the letter die-cuts at my school.  I fused lightweight paperbacked fusible web to the wrong side of a piece of wool felt.  (Wool felt doesn’t fray and withstands high iron temps needed to activate the fusible web.) Once cooled, I cut the felt into 5″ or 9″ squares (leaving paper backing intact) and ran them through the die cut machine.  Larger letters are 8″ high while the smaller letters are 4″ high.  To make the white background behind the HAYES, I simply fused the 8″ black letters to a piece of white felt and then cut them using my 28 mm rotary cutter and small acrylic ruler  to leave a 1/4″ outline.   Outline of the “S” was done freehand.  The large letters were machine stitched to the quilt banner.  The 4″ letters are simply fused in place.  I will go back and add more mustangs and some additional machine quilting before the banner is hung on the wall.  Honestly, I don’t think the 4″ letters need to be stitched down.  They remained securely attached even after a day of heavy use at the reading bowl.

A 1-3/8″ dowel rod with end caps will be used as the hanger.  I’ll add a sleeve before the banner is hung on the wall in the Media Center.  Some schools used rod & pocket casings at the tops of their banners to hold the pole.  Good idea, but with our banner layout and size constraints, it just didn’t look right on the mock-up.

Although the design is simple, it took almost as much time to work out the design details and do the mock-up on bulletin board paper as it did to construct the entire banner.  The sewing part wasn’t difficult at all.  Fusing the paper backed fusible web and cutting the letters took the longest amount of time.

Everyone was thrilled with the banner.  Final tally:  6 hours of time plus $40 in materials (not including hanging hardware). Fortunately, I was able to fuse and cut the letters during my planning time @ work. 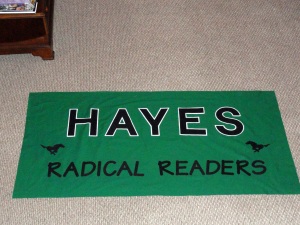